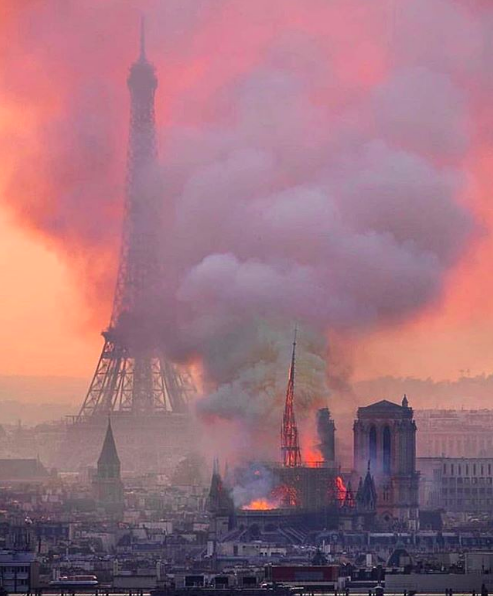 Unfortunately, this morning the city of Paris will awake to fewer bells being rung than the one before. Notre-Dame Cathedral fell victim to fire amid renovations and while the main bells remain unharmed, the city of Paris, me, and the rest of the world mourns as this historic landmark cools to ash.

Growing up, Notre-Dame existed in my mind as a fictional sanctuary where Quasimodo spent his hermit days ringing the bells and making friends with the stone gargoyles; a place where gypsies like Esmeralda found a haven and answers to her questions; and a place where good out-weighed evil (AKA Claude Frollo – I had too many nightmares about this man squashin’ ants if you’ve seen the movie and you know what I mean).

This description may seem frivolous because my only real connection to this monument is through a Disney movie (based on a book published in 1831 by Victor Hugo that I’ve never even read) but stories like this with real meaning and historical significance (not to mention a pious link) have always captured my interest and my heart. Uh, yeah, to add to that the soundtrack from The Hunchback of Notre Dame is incredible. I really tend to connect with music that tells a story rather than one with a catchy tune. Cue Jim Croce.

It’s interesting – and kind of fateful, really. The overall themes from the story and the sentiment of the Cathedral catching on fire align with what’s going on in France and within the Catholic Church itself. Riots have plagued the streets of Paris in response to President Macron’s remarks/policies and the Catholic church is experiencing mass defamation because of the growing Catholic sex abuse crisis.

First comes chaos, then comes order. Nietzche, right? This may just be me finding meaning in something that should just be thought of pragmatically. But was it just a fire or something that signified more?

The religion of Catholicism is based on stories. Themes. Morals. Values. The Bible is a key that allows us to find meaning in life. My approach to Catholicism is personal and theological. I’m no evangelist, trust me. I am a Catholic. I am a confirmed member of the Church. I’m a realist, but I do believe. When symbols of love, sanctuary, community, faith, etc. are put in jeopardy you can see it as a tragedy, yes, but you can also see it as a sign.

Fire is a symbol of re-birth; a purifier; life, energy, change. Is this fire a symbol of regeneration during Holy Week? Just five days ahead of Jesus’ rising, crowds gathered on the streets of Paris and sang Ave Maria and watched as smoke billowed and filled the pale orange sky.

In the comments section of the New York Times piece on the event, this man summed up just about what I was thinking.

When I get the chance to visit Paris and witness what’s rebuilt of this historic, magnificent structure, I won’t feel let down. I believe I’ll feel hope. Because I will be in the presence of both the history and the future of Catholicism and Notre-Dame.